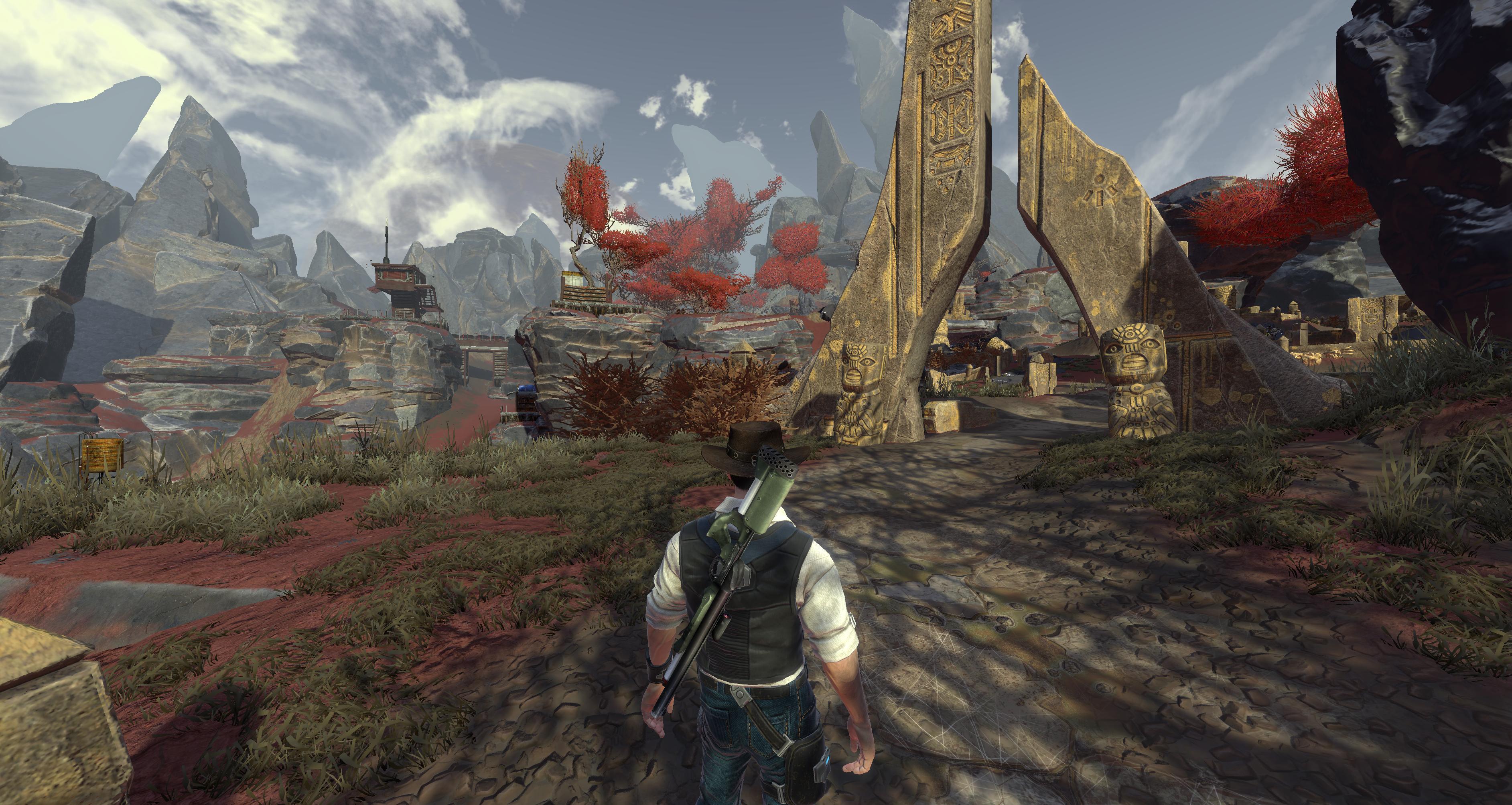 Hey, folks. There have been no updates for a long time but it is time to break the silence and make an important announcement.

As you know we are working hard on the brand new starting location and testing a great deal of new features and other things at the moment. Many of them are already implemented and some are still work in progress to be added in a few months. This is a huge step forward but it definitely needs some testing before the release. Thus, we feel the necessity to share our progress with you and to show you what we’ve managed to achieve so far. It’s time to raise the curtain.

Here’s the deal: we are going to make a private testing for those who’re keen to try the new version of Exoplanet. Once the testing is done, we will analyze players’ feedback and decide if we are ready to make it open for everyone or if it needs more work before that. 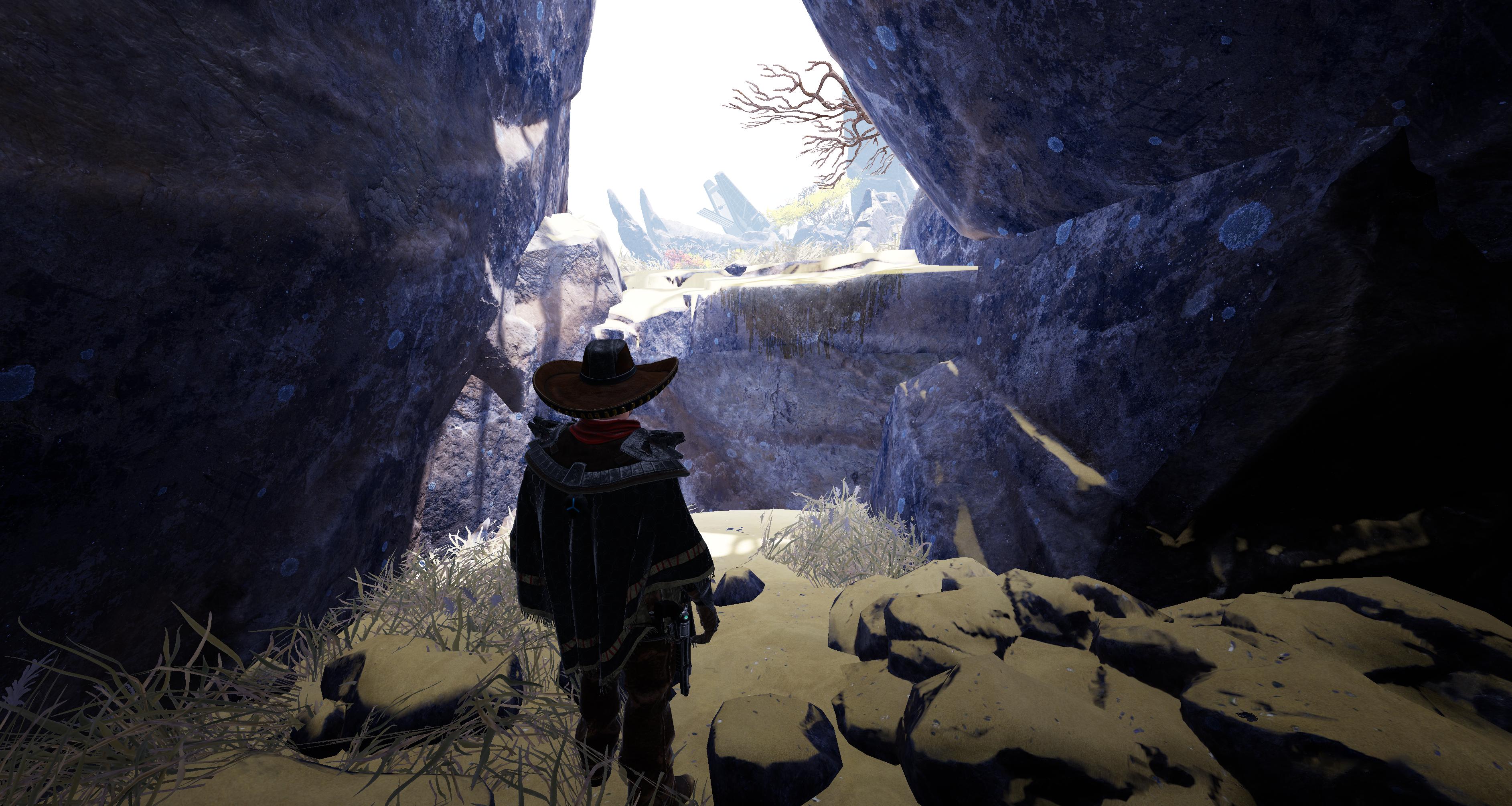 We cherish all the feedback from our community, so your opinion is very important and will help us to improve the game to create a more flawless experience for everyone. So if you want to join testing, there’s a small instruction at the end of the article.

Meanwhile I am going to tell you more about the new location called The Edge. Please, keep in mind that all presented images and GIFs are work in progress: there are some placeholders and bugs, of course, and still a lot of testing going on.

Visual-wise, The Edge is mostly ready. There are a lot of visual upgrades, and we really crave to get your opinion about these changes.

One of the most important things was creating a brand new set of rocks for the game (60 pieces). They used to be brown like the old ones but we’ve decided to change their color to blue, and the whole world feels different now. We’ve also made a set of various big and small stones for middle and small scale. 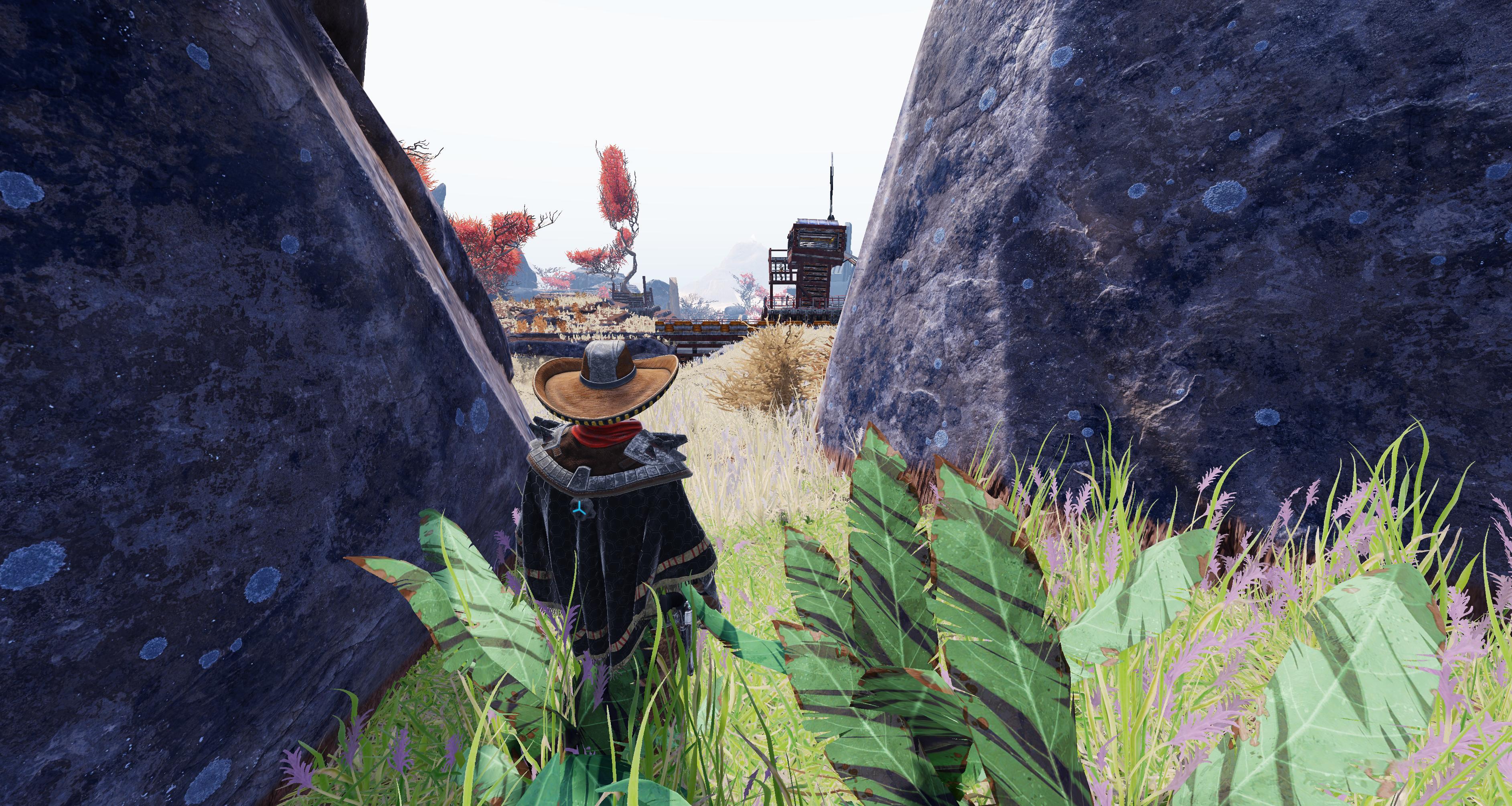 The next big thing was adding HDR support to the Sahara engine. This way we can achieve a more contrast picture with realistic lighting and detalization. 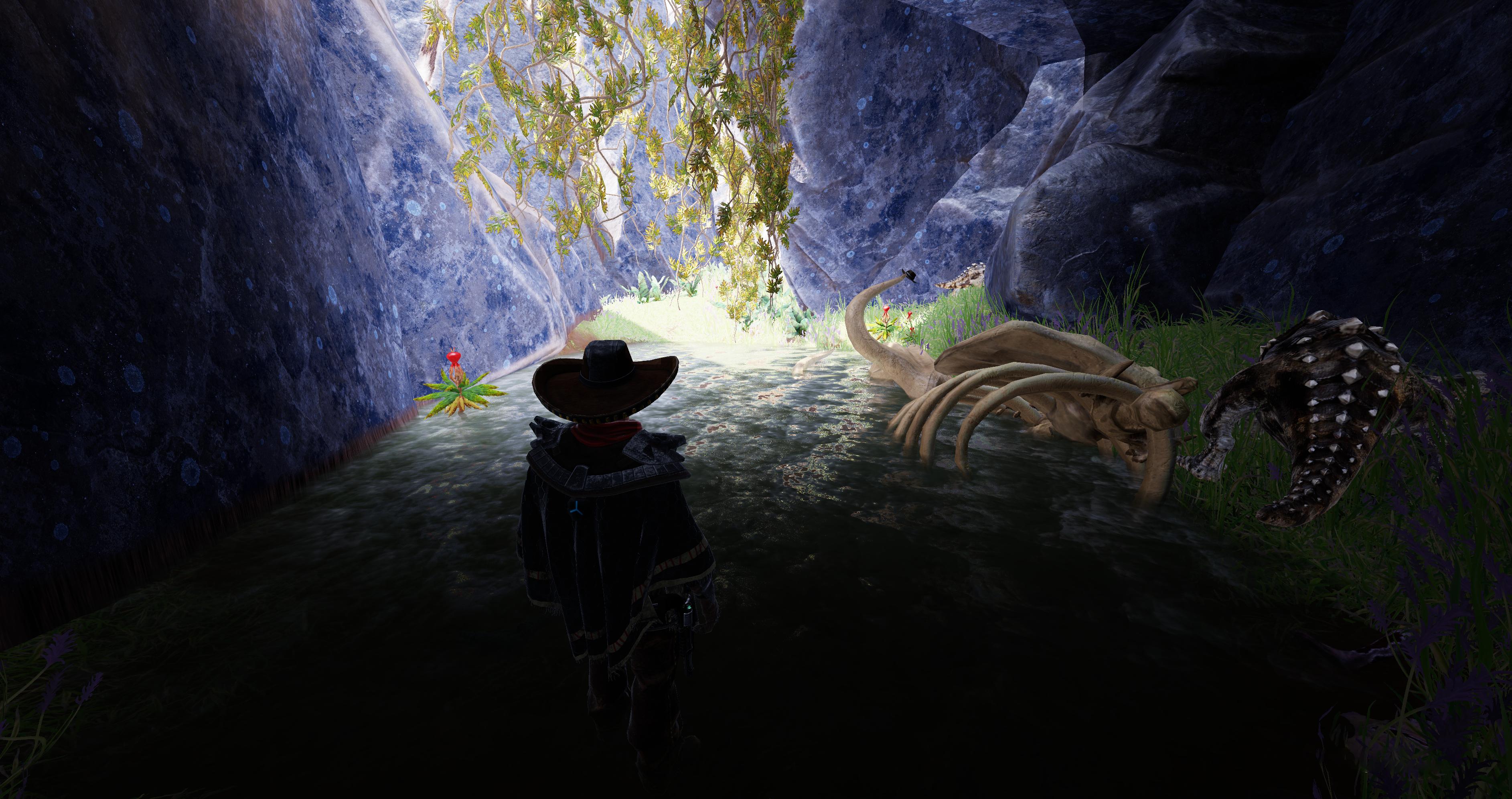 Now caves, for example, are truly dark, though they appear in classic brown-ish colors if there is a source of light available. 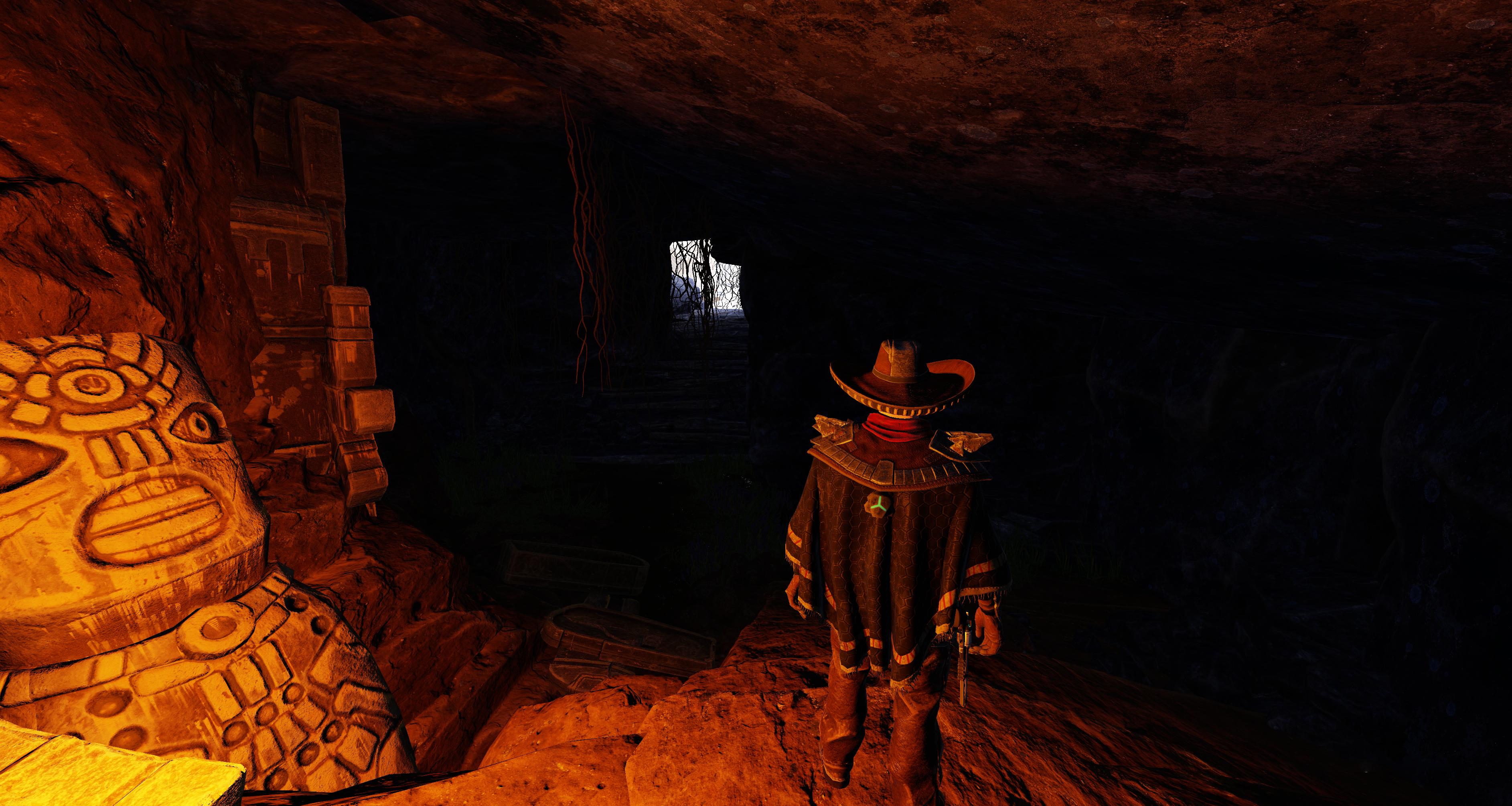 Another change is a brand new day and night system. The old one was basic while the new one is very flexible and allows us to add new weather effects and effects for different times of day. Now we can easily change the sky’s color and brightness of the sun, add clouds, fog and much more. Thus, you can finally experience dusk and dawn in the game. They are a work in progress but I reckon we’ll finish them in time. Day and night were also upgraded. 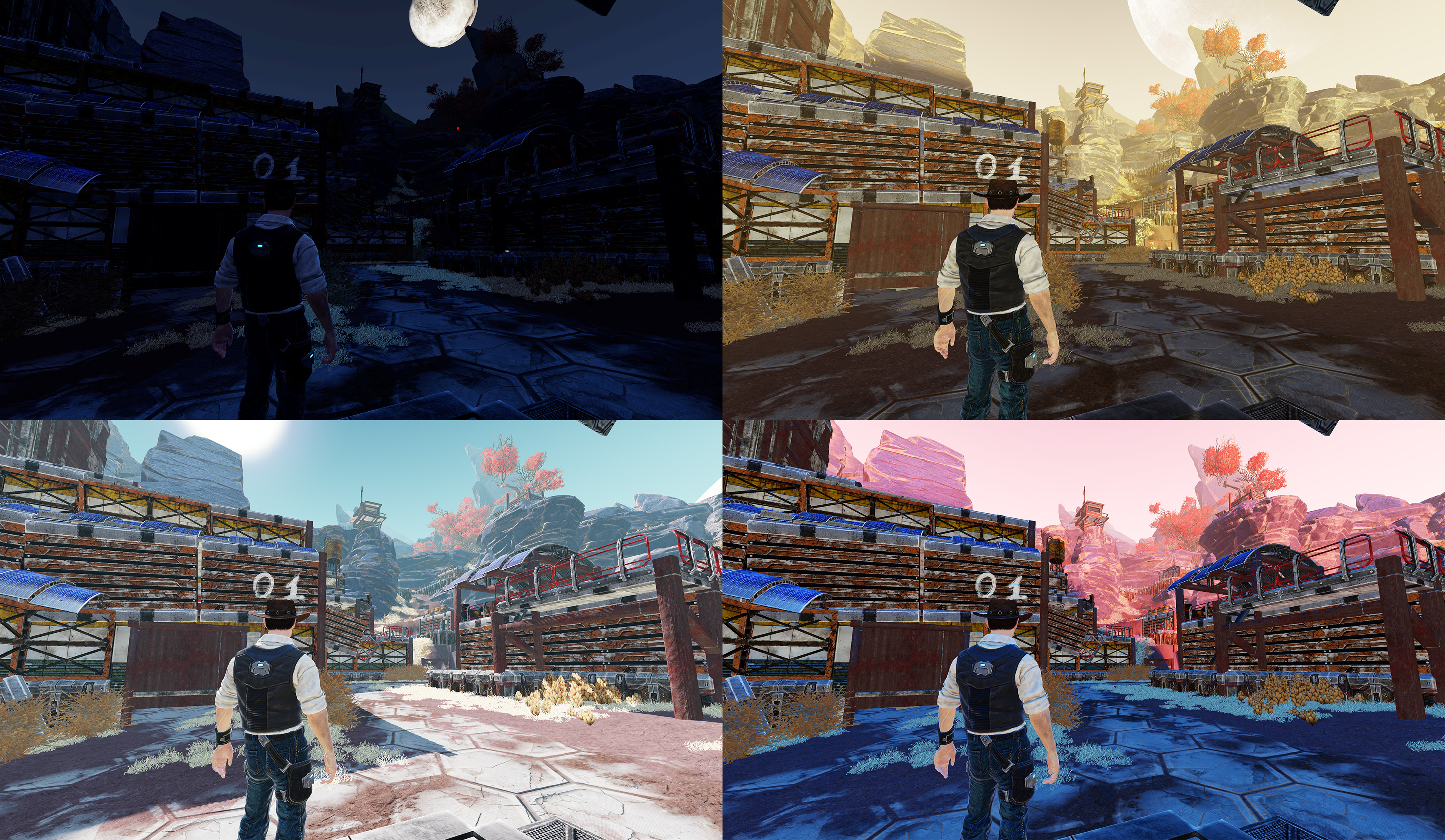 We made huge progress with new grass but still experimenting with its colors, changing it from withered to lush green, and vice versa. 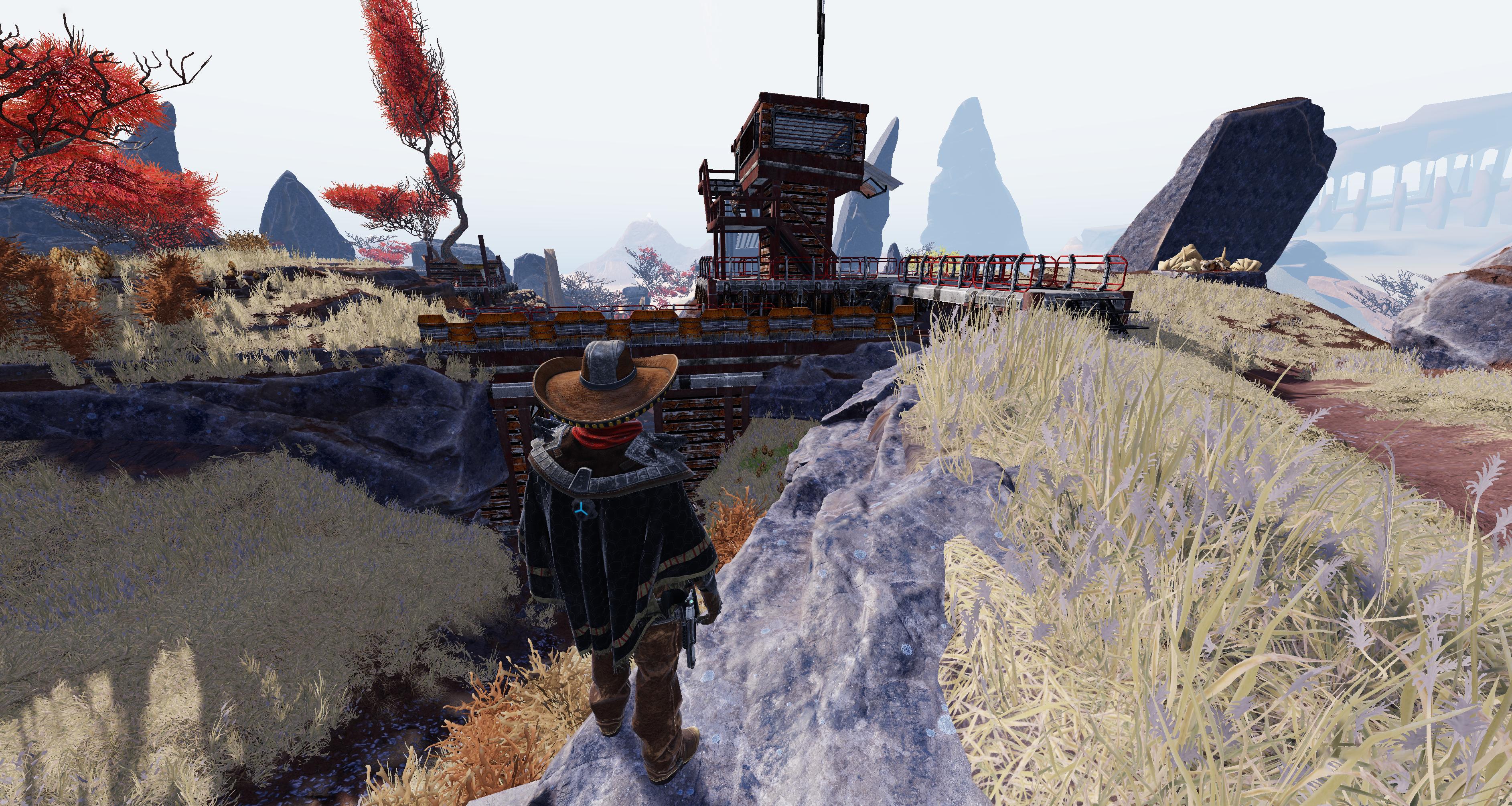 There are also some experiments going on with color correction. Not to mention a great amount of work on textures. 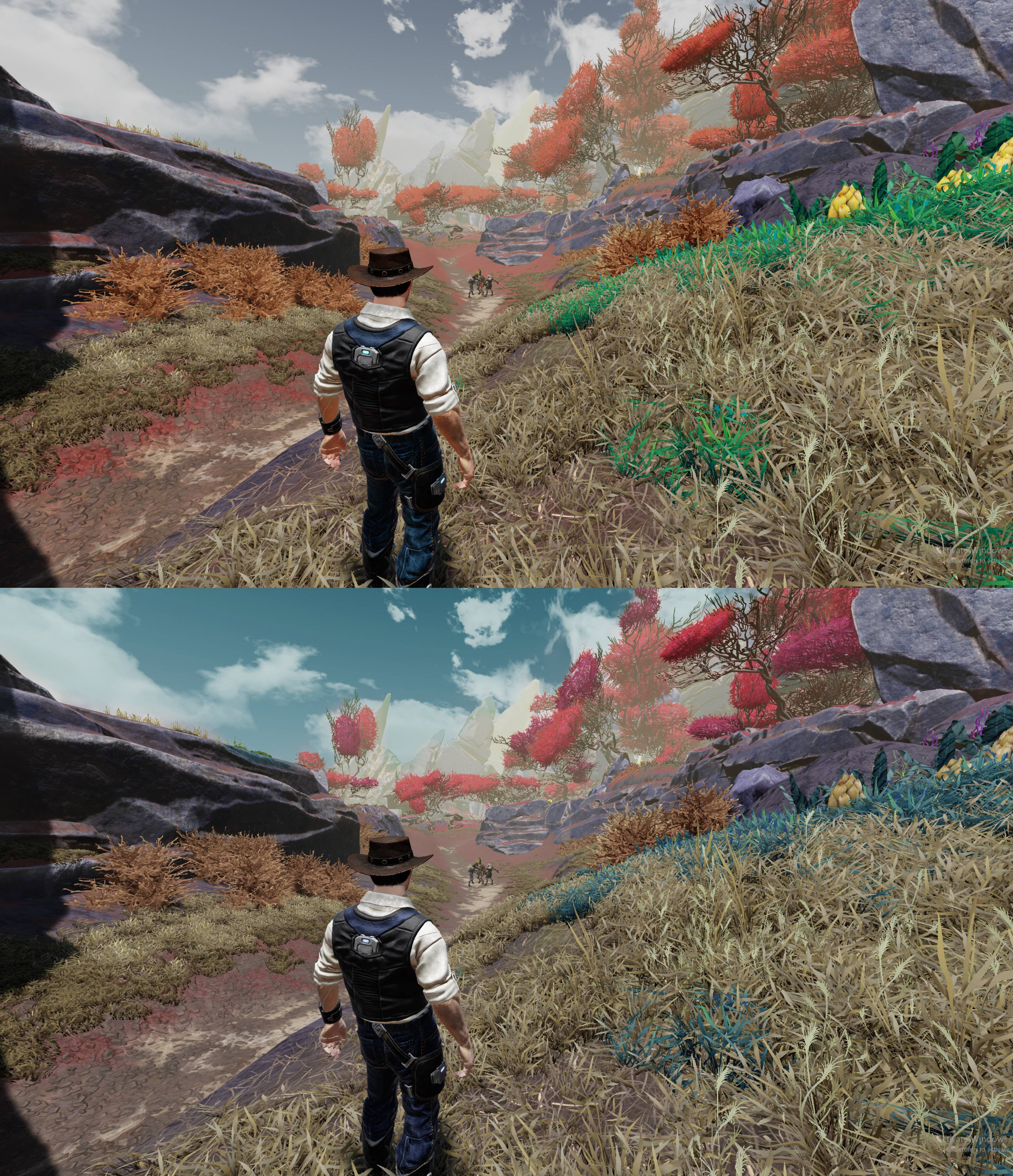 Level design in the new area was significantly improved, it is a true open world now. There are no more flaws like long open world-ish passages as it is in some places of the current Steam build. Thus, despite the fact that The Edge is pretty small compared to both Anomaly Lake and Windscream Canyon, its 0,25km² feels pretty big for a starting area where you can learn the basics of the game without us holding your hand, get acquainted with the world, its laws and lore. 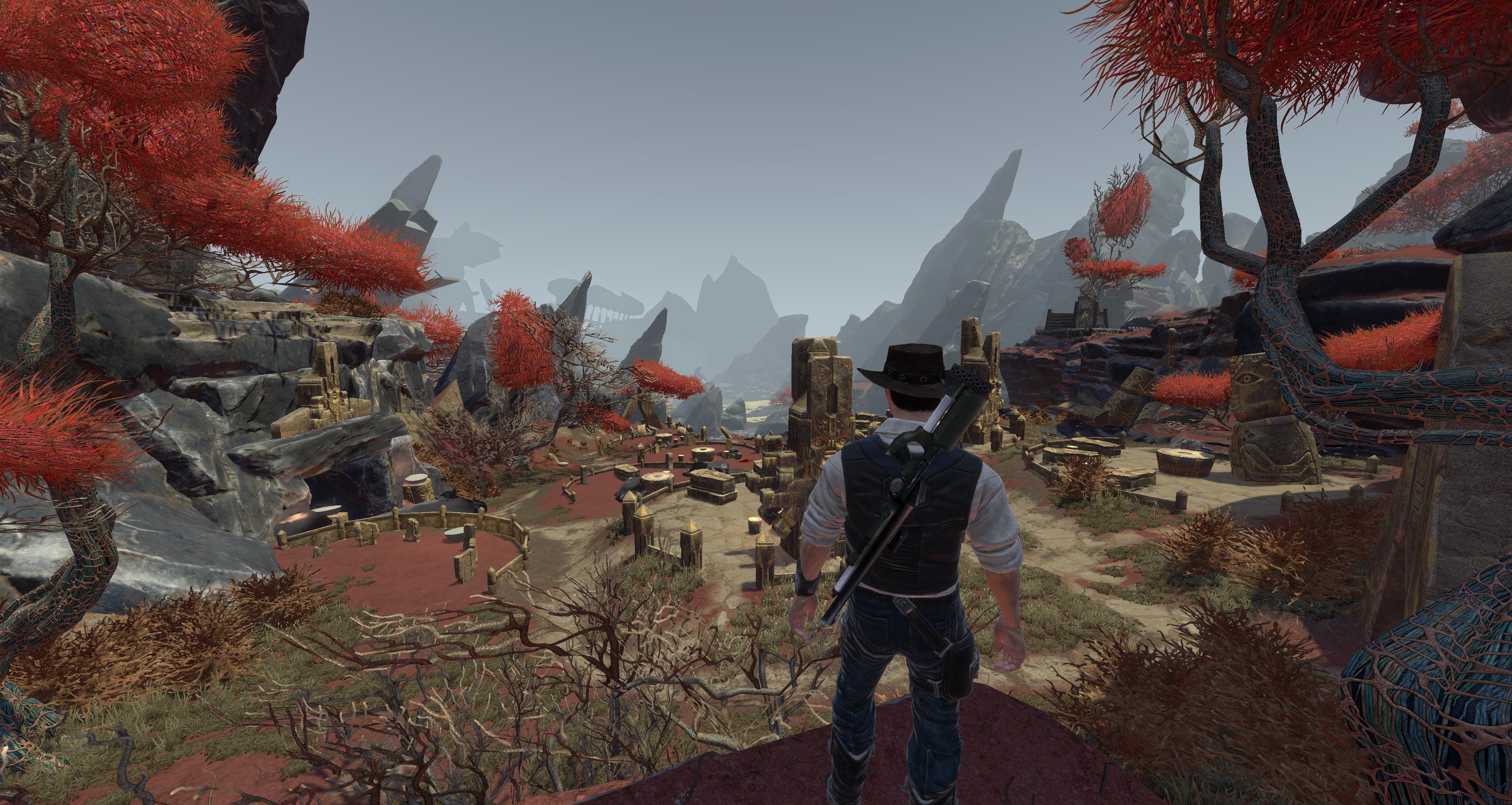 There will be a bunch of quests on the release, all of them are new and much more to follow with the next updates. They can be a bit rough around the edges but we will polish them once we gather enough feedback from you.

The main story is ready, and we have started to implement it into the game. We are also working on an intro cinematic and a new intro cutscene. 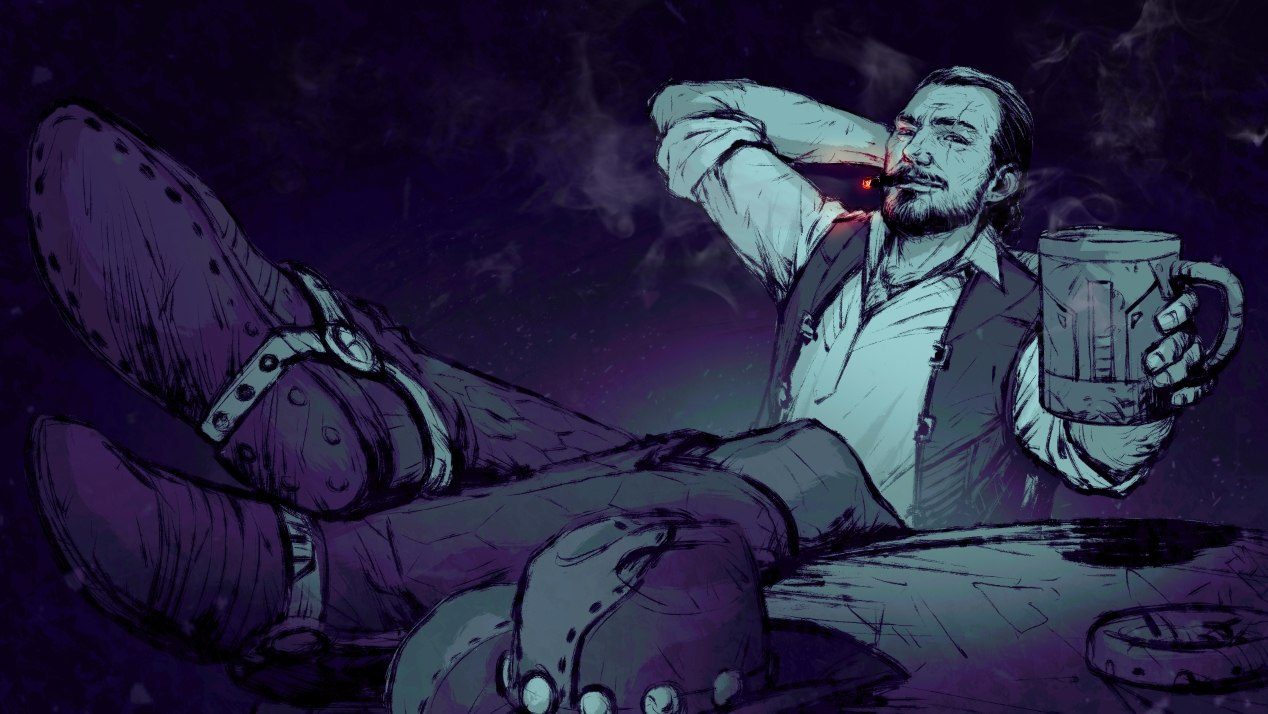 Gameplay-wise, the game also gets new mechanics. The hero can jump to cliffs and pull himself up, so there are more options to explore the world.

There are some new interactive objects in the world like capstans and winches, and both the hero and NPCs can use them.

We are also ready to show you the very first iteration of modular weapons. It takes time to implement such a big feature in one take, so you can’t craft or disassemble them so far but it increases the diversity of arms on the whole. 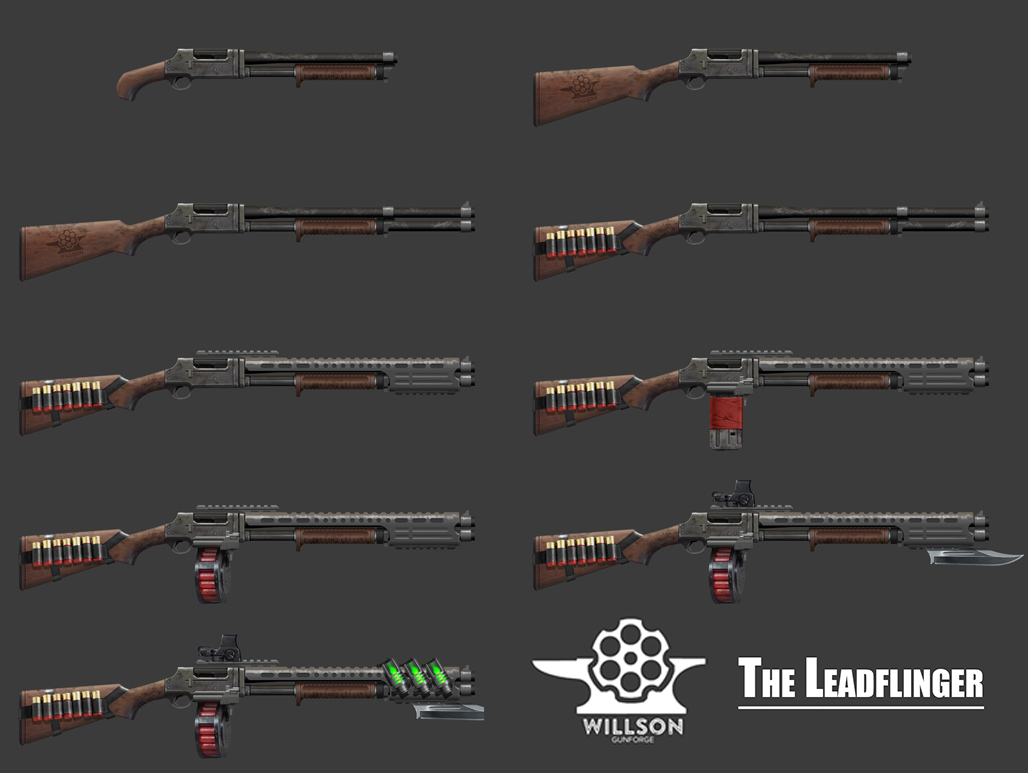 A small but notable thing is a new crosshair for guns and we are going to add more of them for different weapons. 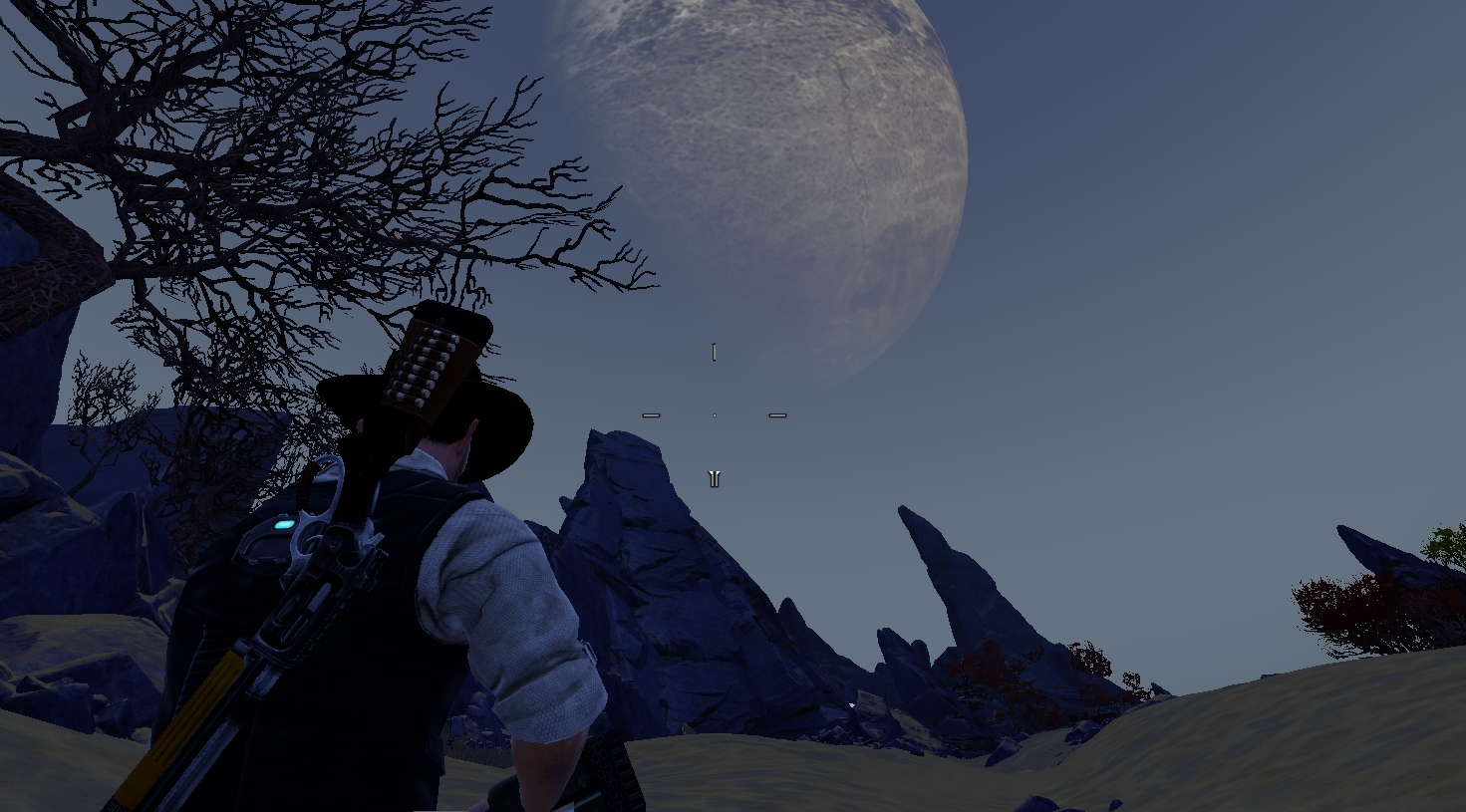 Another thing to mention is our work with cameras. We used a standard third person camera for everything, but now we are adding more options to improve cutscenes. So far it is pretty basic, just some in-game cameras shooting from different angles but we are working on camera movement options as well.

We finally replaced the old bugs with the new insects. As you may know, we were planning to make five different types of them. So far we’ve managed to add maggots and workers. All of them have brand new animations and behaviors created with our new AI system. Warriors are on the way but we probably won’t manage to finish them in time because our animator is on sick leave due to COVID-19.

There are a lot of other assets added to the game like new human clothes, some animal skeletons, different types of lamps, a set of rails and a trolley in a mine and much more.

Of course, there are some updates in sound design. All humanoid NPCs, for example, now have various sounds to play when being hit. As for music, we are working on an adaptive soundtrack which changes in response to specific events or places in the game. The old tracks can’t be used anymore, so there’s a lot to do yet. Anyway, we’ve created a few new tunes for The Edge to experiment with them.

There are other changes, of course, and a lot to tell, as we are working hard to bring even more content for the release but it would be much better to see it for yourself. Thus, if you are looking for new experience in the world of Exoplanet and really want to make the game better, join our private testing. 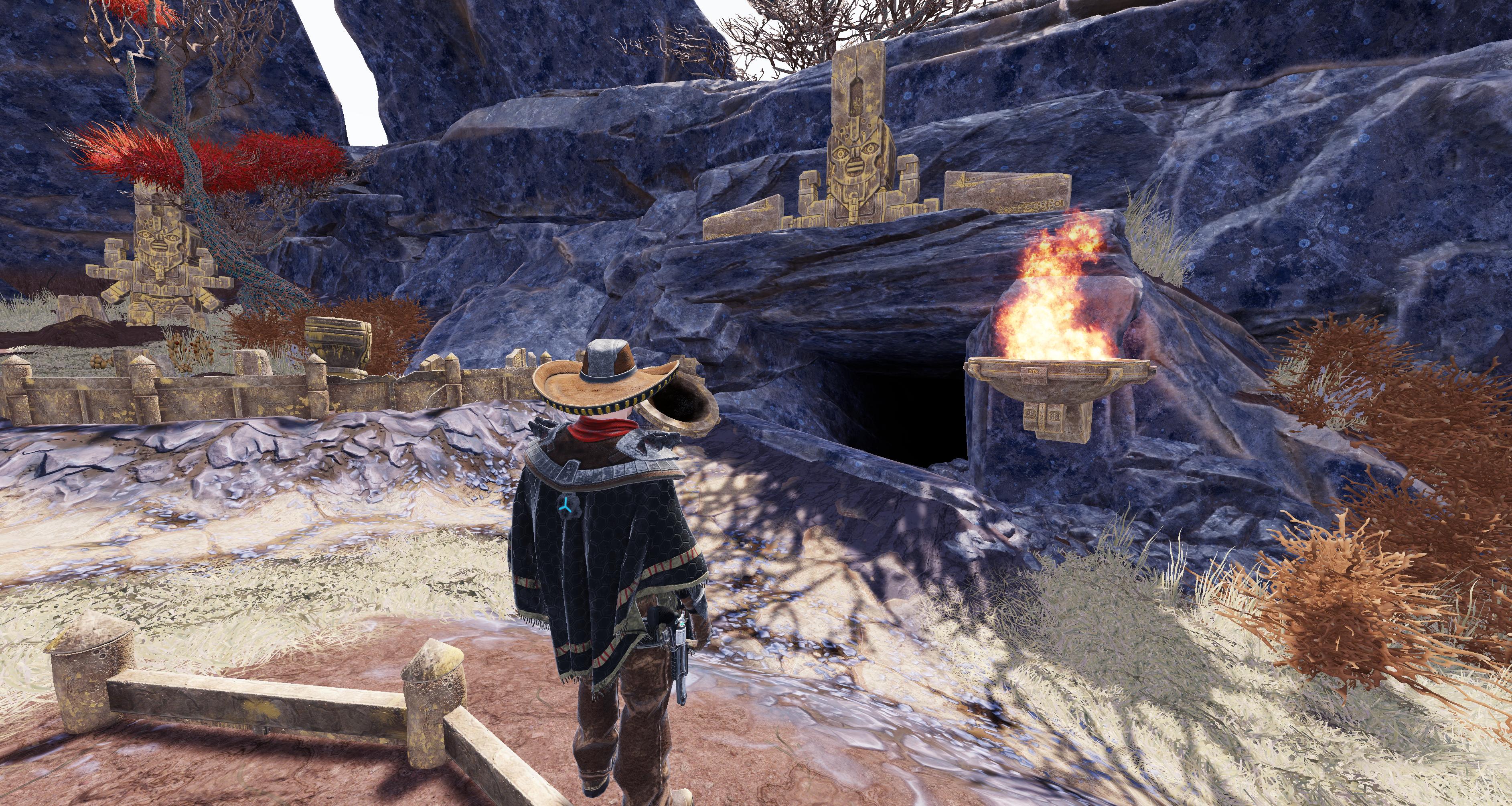 HOW TO JOIN PRIVATE TESTING

Obviously, you have to own Exoplanet: First Contact in your library because we are going to add the new build to a separate beta branch on Steam. This way the old build will be available yet as the main build while you can get access to the new one with a few clicks.

Also, we are looking for those who have already played the game thoroughly, know about its strengths and weaknesses and can tell the difference between the old and new versions. 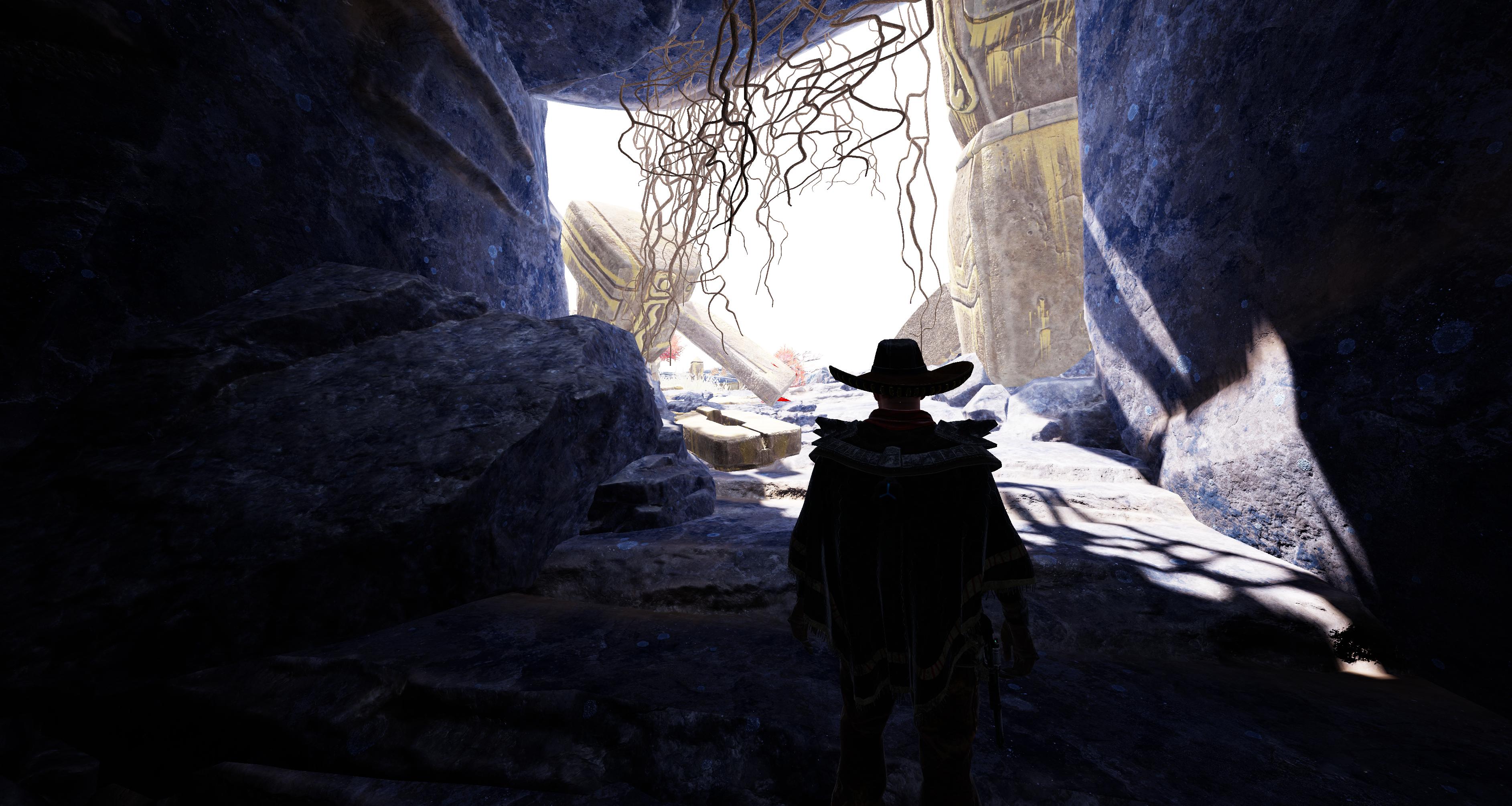 If you meet these requirements, next thing to do is to join our Discord and PM me or tag me there with @bijou. I will contact you to share more information about the testing.

What do we need? Any feedback you can provide about the new build. Probably, we are going to create a survey and place a link to it at the end of the build. Also, you will get access to a closed section in Discord to discuss changes, to ask questions, to share anything you want to, and, of course, to report any issues and rough edges.

We will begin the private testing as soon as we finish a few important things. If the build is stable, we will probably make an open testing later for everyone who owns Exoplanet.

In the end, I’d like to thank you for your patience and support. That’s really important for us. Stay safe.